I spend a lot of time in traffic. Compared to many other commuters, that statement is a total lie, but for me 25 minutes stuck in a car is about 25 minutes too many. 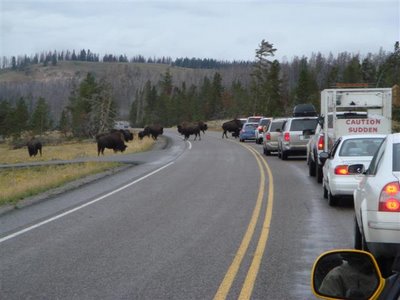 I figure that if I'm stuck in traffic, I might as well not be paying for it. Recently, I upgraded to a hybrid to enhance my MPG (tax credit + gas prices == economic win), but still, I know that behaviorally there are ways to eke more distance out of gas. An easy way to save on gas (even if nominally) is to accelerate as little as possible; seeing as most of my acceleration is out from red lights, this raises the question of how do you maximize your speed through a red light, thereby reducing the amount of acceleration required to attain your desired speed?

This is an economic conundrum if ever one there was, so it makes sense to tackle it with a good measure of game theory. To make the analysis simpler, we'll start with assuming that we know when the light is going to change, and that there are no other cars in the way; in part two, when it happens, we'll look at what happens when knowledge of light-changing times follows a known probability distribution (a much more accurate model). If there is a part three, it'll examine what happens when other cars are already waiting at the light. For now, let's also assume that we're moving fast enough to run the red light in absence of acceleration (deceleration).

THEOREM: The optimal acceleration function slows as rapidly as possible to a constant \( v(t_i) \), such that \( (t_f-t_i)v(t_i)=x(0)-\int_0^{t_i}v(t)dt \). In other words, the optimal strategy is to immediately apply maxiumum braking pressure until you reach the speed which will perfectly cover the distance to the light at the time the light changes. To show this, we'll need a few tools on our belt.

Back to the theorem at hand...

To maximize your speed through an unblocked traffic light for which you know the change time without touching the gas pedal, slow down as quickly as possible and hold the constant intercept speed once you reach it.

Way too much math to show that little fact. Sometime soon, I'll work on deriving a similar proof for unknown change times following a probability distribution. Then we'll be cooking with gas.