There was an interesting discussion on reddit the other day about a classic internets pie chart: 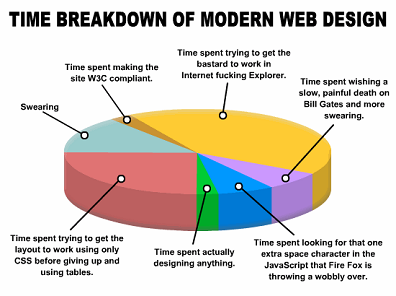 Calling the ensuing conversation insightful would be a bit much — there was a fair deal of dissent as to the fact that the page's title is Web Design Timeline, while in fact the image is a pie chart — but this comment thread caught my eye. The idea of not supporting difficult browsers is hardly new to web developers (remember the 90s, when every site said “Best Viewed in [browser x]”?), but it's never really been recognized as practical simply because it's stupid to cut off a large percentage of web users from your content.

Call in a solution. I'd never considered just eliminating compliance. To be certain, my pages don't look identical across browsers, but they're usually pretty close. Although I only have access to IE7 and FF2.0 at home, the conference rooms at work run IE6, and I've got enough friends with Macs; setting up a site is an exercise in commuting and personal networking — and my sites aren't even all that design-y.

Still, the idea of eliminating backwards-compatibility really struck a chord. Having recently moved routeslipper off web.com and onto 1 & 1 (web.com was having severe availability issues, and had recently doubled my monthly bill; but I digress), I was hacking through a couple database issues when I decided to just overhaul the entire backing code — that point where you recognize how far you've come in the last year or two — and convert it to valid XHTML1.0 and a nasty CSS soup from a nasty table spaghetti.

I will not be testing the site in IE6. Its share is diminishing daily, and eventually people will catch up. If the internets as a whole slowly get rid of support for IE6, people will be trained to not use it. Utopia awaits.

I recoded the find a route page on routeslipper last night. Sadly, getting all the JS and DB queries lined up took the better part of an hour, but by the end I had version which a functioned the same as and looked nearly the same as the original. I went through my nightly post-coding check of all new pages a couple hours later, and found myself stuck on the find a route page; I could enter my search area, no problem, but there was no submit button on the form.

During testing, I had failed to recognize that there was no submit button, and that I was pressing Enter every time.

The form looks much better without the button — the button is 100% unnecessary cruft. If we, the web developers, slowly eliminate submit buttons from forms people will accustom themselves to pressing Enter; they will be trained not to use the submit button. Utopia awaits.

The sad lesson is that optimistic(/lazy)-developer route simply offends good usability guidelines. Sleekness and simplicity (on both sides) are no substitute for a usable interface. For the record, although routeslipper now sports a submit button, I will not be officially supporting IE6: some things are just too much to bear.