I was a little amused a few months back when the LA Times released a Flash gadget allowing you to balance the California budget. At first glance, it's a neat tool to help understand the nature of our current budget woes; however, once you toy with it a while you notice that there is a secret to balancing the state budget: you must raise taxes. No matter how many cuts are made, there is no way to solve the state's deficit issues without increasing funding.

Since this is more or less in line with my view on the nature of the solution to the problem — we're going to have to work to find a happy medium (or unhappy medium) which represents a tradeoffs between cuts and increased taxes — I smiled to myself and sent it to a few friends with the line, “There's only one way to solve the state budget...”

Enter the Los Angeles Budget Challenge. Unsurprisingly, Los Angeles is itself facing quite a deficit in the coming year; following the public response to the Times' California budget balancer (I assume positive, but regardless it certainly got people talking) the City of Los Angeles decided to release its own Flash app to enable citizens to witness the city's tradeoffs for themselves. 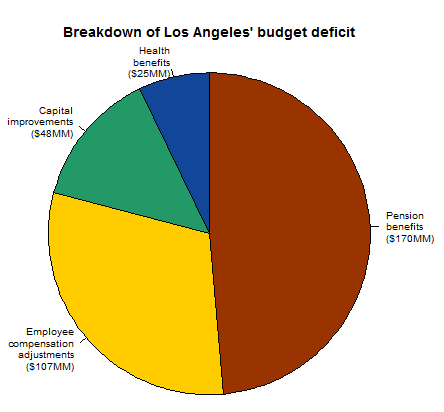 as reported by the City itself

This makes for an informative activity: do we keep the current cuts to libraries, or increase funding slightly so that they are open Monday again? Do we cut hiring for the Police and Fire Departments? Can we afford to remove any more funding from our roads, which are already worst in the nation (PDF)? These are the decisions government has to make!

However, it's all one big, taxpayer-supported con as there are only two ways to balance the City's budget. Ignoring for now that their pie chart and text says that there is a $350MM budget deficit while the course of app only forces you to find $300MM in additional funding, through all but two options you can only recoup $265MM in the coffers; to close the gap as reported in the game, you must either raid the reserve fund to its maximum extent ($40MM, creating a surplus of $5MM) or cut public employee compensation.

This last one is a huge option: by maximally docking employee pay — to the tune of 10% across the board — the City saves $200MM. By cutting salaries we can cover nearly the whole of the deficit!

This seems to suggest a necessary political solution. Why, then, is this nefariously presented? The last option available is the one that all Californians are now aware of: pension reform. And there are two options: you may either select, “No. The City should not redesign the retirement system for new employees,” or “Yes. The City should redesign the retirement system for new employees (requires voter approval for sworn employees).” Choosing the latter will save the City $0MM.

What? Are you kidding? Pensions, contributing $170MM per year to the City's deficit by the City's own admission earlier in the app, cannot be reformed to save the City any money?

I buy that pension reform will not save us any money today; it will probably only save us a little bit of change over the coming few years. However, as current young people become future old people and begin retiring we will reap incredible dividends from overhauling the pension system. To claim that pension overhauls will not help the City's budget problems at all is disingenuity at its finest. If we do not address future and looming budget problems, we will be forced to play this Flash game annually for the next several decades.

Whoever is responsible for this voter-funded message to the voters — that public employees should be punished now and all services should be cut, but pensions should remain untouched — deserves a sharp kick out of office for open deception of the people. This is irrationality at its finest, and is a clear demonstration of either political-mindedness or stupidity. Neither is acceptable at a time when citizens are expected to bear the burden of financing government's past mistakes. We deserve transparent, thoughtful, and accountable leadership.